We Are Still Bored In The City 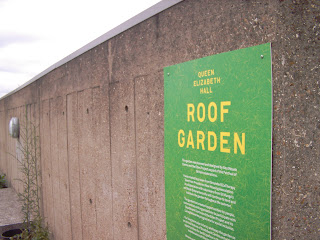 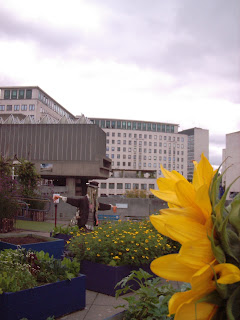 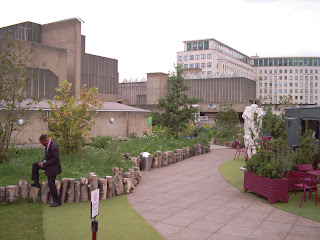 Situationist writer Guy Debord wrote: 'It is known that initially the Situationists wanted at the very least to build cities, the environments suitable to the unlimited deployment of new passions. But of course this was not easy so we found ourselves forced to do much more'.

THINGS
The Ruinist spent a few hours this very day at a very old haunt, the South Bank of The Thames. Famous for being much described as sheer 'brutalist concrete', there was something reliably materialist in all that cold, heavy architecture. Nowadays the South Bank has been given over to entirely to 'thing-ification'. It is now filled with 'things'. Searching for somewhere to sit, The Ruinist attempted to see what The Roof Garden might be despite an already wearying air in The Ruinist's head that was beginning to inflate the temples. Anyhow, the Roof Garden is something created in partnership with someone and with someone else and funded by someone else and was created by someone with the vounteer work of homeless people. It's a garden in the concrete with turf, plants, seats and, of course, a cafe. It's the creation of an environment. Green space, living grass, breathing plants and so on. Somewhere you might get away from it all except that this is the all you are trying to get away from. Two security guards walk around the site keeping it secure. No alcohol, no smoking, no dogs, no rain, no crowds - these are the rules of The Roof Garden. No passions allowed in the Garden.

The Ruinist has seen the ruination of the South Bank ever since they decided to inhabit the formerly utilitarian spaces (such as the large melancholy downstairs cafe or the unused space under the railway bridge) with cafe chains and boutiques. No longer is it possible to enjoy the public space without the public intruding into that space. Formerly a place for hanging out, all nations and all sorts enjoying the space fairly free of the moments of exchange, nowadays the moment of exchange is very public.

But worse than this, has been the discovery of how 'things' can increase that kind of public. Nowadays the worldview is to want 'things'. The South Bank now has a regular turnover of 'things' - a mini Brazilian favela on the terrace, an elongated faux-market along the Thames side, a roof terrace 'garden'...

Each thing is a version of something else - a favela? a market? a green space? All of these things somewhat communal in the original form. Here, they are simulations of community, each thing a moment to enter into an environment. Each thing with an admission price be that cash or alienation

The law of the thing is that it must remain temporary. In this way it can easily be replaced by a new thing. And another. And another...

Are you going to the 'thing' this weekend? Have you seen the 'thing'? 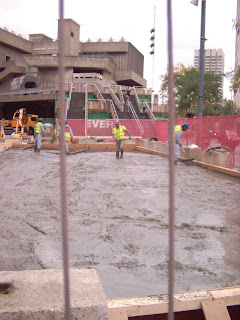 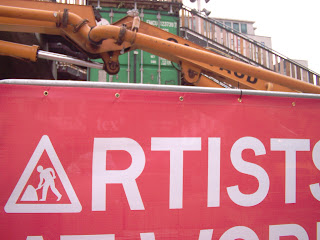 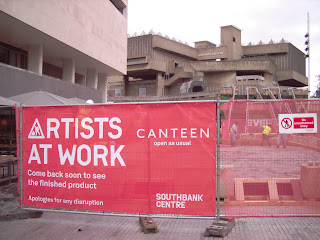 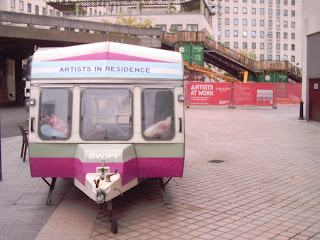 ARTISTS AT WORK
It has long been a Ruinist favourite line, good at parties and that, the old curmudgeon Celine's 'Nowadays people are so bored that artists have been posted everywhere as a precaution'. In fact, I'm sure The Ruinist has put this one up here before. But fuck The Ruinist, if it ain't true.

As an accompaniment to the zeitgeisty spread of 'things', the South Bank has also got some architectural/art cross-over construction project going on at the back of it by York Rd. Trucks and diggers, piles of stuff and mixers are all in situ as are (today) Polish and other workers. Passing by The Ruinist watched for a time as the working men stood knee deep in cement as it was poured from a big truck. They swooshed and swept the concrete across the floor to make some kind of level for the 'thing'. Looked like hard work, the kind of thing The Ruinist is a bit allergic too. Needless to say, this work which is a bit of an obstruction to the pedestrians moving through the space is happening behind temporary fencing. Needless to say again in this age of information and semantics, a large banner has been produced to explain what is going on - part advertising, part apology. Here you can read the words 'ARTISTS AT WORK' as you watch men stand in runny concrete, the notion being that even these labourers and builders are, yes, they are artists too. Nowadays everyone is an artist. Everyone is creative. Everyone is an Artist In Residence. 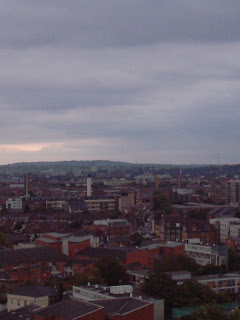 'On the horizon of the modern world dawns the black sun of boredom...', Henri Lefebvre, Critique of Everyday Life, Vol II

REIGN OF BOREDOM
Here is a picture of the city. Here is the dense clump of the same after the same. The bourgeoisie have triumphed. It has fashioned society after its own self. Marx wrote about this in The Communist Manifesto way back as 1848 - 'It compels all nations, on pain of extinction, to adopt the bourgeois mode of production; it compels them to introduce what it calls civilisation into their midst, i.e., to become bourgeois themselves. In one word, it creates a world after its own image'. (1)

It has made a world of vast concrete things, little temporary green places, 'interesting' destination shops, pseudo encounters, fads, fetishes and faciality (2). It has made a world to be seen in, to show one's face and to regard one's face as a totality. It has stopped using books to see into the world and has made a Facebook to regard one's own navel. The world will only appear as real when snapped, when stored, when current status has been adjusted with the latest image because the image of reality is for the bourgeoisie more real than a punch in the face.

Sitting in the concrete garden you can't hear any birds, just the twitter of people sending a update (ten minutes after the last one) telling some bodies somewhere else that they are at the thing. I am somewhere! But they are not really there for if there were paying any attention they would see the cracks...


We are bored in the city and we are bored in the country. As much as the Situationists have been hollowed out in the last 50 years and the husk forced into unsightly and grotesque partnership between the art institution and the academic institution( 3), there remains something vital within (early) Situationist writing and ideas that still ignites the passion for something fucking more than the above.

The question The Ruinist often asks is 'How much more stupid can things get?' It's not as if The Ruinist feels paralysed by a critical analysis that thinks The Spectacle has recuperated all acts of the imagination and all daily acts of resistance to the 'banalisation' of society. Far from it. But something is going on out there and it ain't pretty. The Ruinist doesn't even think this is a case of The Ruinist being moralistic. The Situationists described the process of stupefying society as 'colonisation'. That which was once outside the sphere of capital (moments of life within the everyday) are slowly drawn into the alienation inherent in the commodification of those moments - green spaces, acts of the imagination, healthy food, communal structures etc. Why is The City not filled with interesting, exciting, organic, historical free and open spaces? Why is The City not filled with communal playgrounds - mazes, rivers, caverns, grottoes, aerial walkways, beaches, clifftops, secret places to eat food that grows naturally, staircases to Gawd knows where, underground cinemas, nameless wildness, portable housing, revolving political debating clubs high above the rest of the towers, sleeping chambers for one hour naps, games to be played across the whole of a district, free shops, 50ft long palindromic signs, puzzle places, permanent snow - places where the imagination runs free and constructs encounters and situations based on giving ourselves time and space to be. This would be in contrast to what we have now where the spaces of the city are given over to privileging the living death of an economy of paying rent and working every day.

For sure some of those places dreamed of above still exists in the cracks of the City and you have to look hard for them. But each day, the City fills those cracks with gunk to smooth out the terrain and build yet more banks, offices, showhomes, restaurants and to fill what was once open spaces and free parkland with more 'things'.

"Space, already mystified and presumed innocent, is produced in capitalism in a way that makes it appear all the more devoid of social relationships. This is what Lefebvre called a spatial fetishism. In his work, space is in a way the “thing of all things,” and taken to its fetishized/reified vanishing point, a non-thing, simply a plane or empty stage upon which “real” things happen".

For those who are 'bored in the city' (as Chtcheglov wrote near the start of the inspiring Formulary For A New Urbanism) some acts must come to pass that radically re-think this colonisation. Set the fires burning once more, for acts are urgently needed.

Cuts? Unemployment? Hacking? Looting? One more step if we are to be Utopians! Now is the time where we will 'be forced to do much more' for the world is permanent and not a temporary 'thing'. It is real. It is consequential. It is possible to destroy this world and make a new one. It is possible....

'Today, what is the aim of utopian investigation? The conquest of everyday life, the recreation of the everyday and the recuperation of the forces which have been alienated in aesthetics, scattered through politics, lost in abstraction, severed from what is possible and what is real'. Henri Lefebvre, Introduction To Modernity

(1) Not that The Ruinist thinks any longer that the following passages in The Manifesto that 'the bourgeoisie forged the weapons that bring death to itself; it has also called into existence the men who are to wield those weapons — the modern working class — the proletarians' is going to take us any where these days though.

(3) It is now the case that even the ('better and longer than May '68') Italian autonomia movements from the late 60's to the late 70's are now being annexed by this deadly chloroform of curators and lecturers. Here

Labels: Banalisation, Boredom, Concrete, Debord, I Blog Therefore I Am (A Cunt), The South Bank, Things

Looks like you guys need a lot of Deep Green Resistance to liven things up. jaGoogle it.

I'm afraid we will be in your Deep Green bamboo cage, my friend.