The Eclipse and Re-emergence of something...

Recently, and with our delight for what we have been calling 'public text', we stumbled upon signs of life that had been buried for 30 years or more because we happened to see, for example, a wall in a new light. The Ruinist is often struck how something that was previously unseen can be suddenly illuminated because the sun is shining upon it in a way that you have never seen before. 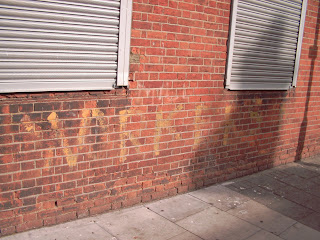 Here, a painted grafftio that reads 'WORKERS' discovered at the junction of Walworth Rd and Liverpool Grove (the one with St Peter's church on it, designed by John Soane - see previous post!). But The Ruinist asks 'WORKERS' what? There doesn't seem to be anymore painted letters. Do you know? Was it you? 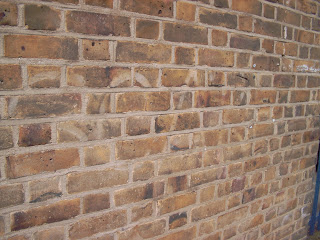 Here's one we do know about. You can just read the word 'SCARF' written in spraypaint. Surely spraypaint begins to date graffiti. Whilst 'WORKERS' is the result of a brush and a pot of paint and thus quite cumbersome and time consuming, the invention of spraypaint made things a whole lot more speedy and calligraphic.

Memories here are stirred by the 2nd March 1980 National Front march through South London. Intending to march up Walworth Rd to The Elephant, they were routed at the last minite and escorted by cops south to the backstreets of Peckham. The Southwark Campaign Against Racialism and Fascism had done a sterling job of getting hundreds of determined anti-fascists out at The Elephant and down Walworth Rd along the proposed fascist route. Hence 'SCARF' on the wall of the Met Police's scientific forensic dept on Amelia St in Walworth. 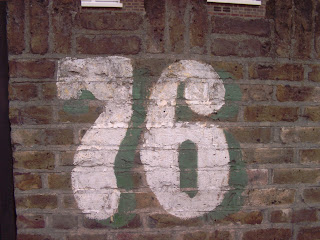 Here's another revelation that we enjoyed. We had already known that 76 Peckham Rd had been in the 1970's as some kind of hang-out for anarchists. We had noted in our ledger of south london radical activity the following: 'Class War Comix - Epic Productions, 76 Peckham Rd, London SE15 (1974)' and the 'autonomous collective Black Bear' who had published 'Feminism As Anarchism' around Summer 1977 from the same address. It would not be difficult to assume the hand behind the delightful and theatrical font still up on Peckham Rd - long-term local Anarchist illustrator Clifford Harper! We asked around and so it was!

Coming soon: A new series of local discoveries in the same vein! Until then.
Posted by THE RUINIST

Great that some of this is still visible. I was very sad that the graffiti in Cold Blow Lane SE14) was painted over last year - it was a real museum of graffiti going back to the 70s.

Yes, it was sad when the once ubiquitous 'REPUBLIC NOW!!' was cleaned off of a wall in Walworth where it had remained since the 1980's. I think I remember seeing that graffiti all over South London at one point! Anyone remember that one?

THE RUINIST said...
This comment has been removed by the author.
3:59 PM

Looking again at the 'WORKERS' graffito, I can see that there is another half-finished addition (?) above that word in spraypaint that reads 'Mill'. Presumably an interrupted attempt at 'Millwall', we now have a graffito that reads 'MILL WORKERS'!